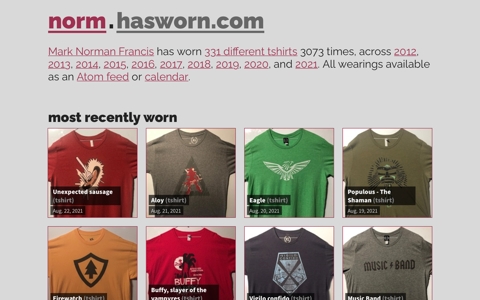 This is the second in a series of articles about hasworn — the site I run to catalogue which tshirt I wear on any given day. The project is open-source and published on Github, and my wearings can be found at norm.hasworn.com.

At its core, hasworn is a fairly simple django CRUD application. It has a very light data model (people, items of clothing, when people have worn said clothing). It is running on a t3.micro AWS EC2 instance, using docker-compose to connect postgres to django, and nginx as a webserver and reverse proxy. Not an unusual pattern.

However, when you are browsing norm.hasworn.com, you are looking at static generated pages, being served directly by nginx. There is no hit to the database.

From one perspective, not hitting the database every time a page is served reduces the CPU requirements, which enables me to run this site on the smallest instances, costing me very little. As a side project, I really don't want to be spending vast sums when I don't need to.

Essentially, this is a very slowly changing site. Unless there's a new user adding in a lot of historical wearings, on any average day each user would add one wearing (maybe a small handful if they were logging everything they wore and I had bothered to add types of clothing beyond tshirts; ten or so if they were fancy and changed for dinner).

Anyone requesting my hasworn summary page between the time I update it in the morning and the following morning should get the exact same page. Nothing has changed.

Therefore the HTML does not change, either. So I can cache the result of generating the page. And what is the easiest cache to use? The filesystem. I don't need another service running, another thing to have to configure and monitor. A server reboot doesn't empty the cache. And it is more than fast enough for my needs. Plus, the server has around a quarter of a gigabyte of RAM free, so many thousands of pages can end up fully cached in memory.

The individual wearer homepage (eg mine) takes between 1.5 and 2.2 seconds to generate on a quiescent server. It takes nginx less than 50 milliseconds to serve that HTML. Nginx can serve the page more than three hundred times in the same period that it takes django to generate the page from scratch. And far more than that when the server is busier and the page generation would take logner.

Is it more effort to write the code to create static pages and save them to disk than it would be to serve the page from django? Yes, but it wasn't substantially more effort than it would have been to add the same pages to django instead.